Friendship is the fruit of

those who sow kindness

Last weeks short takes, with a different colour for each day

Ready to toss this chair to shit house

Wrote a letter to Kathy-Lee

Awake and up at 7.15am when Tim went to work, Leo was awake also but when I called him for help he didn’t come so I went to speak to him he was asleep again.

I let Leo sleep and he woke up around 11am he made himself breakfast after a bit and was still eating it when his mum arrived to pick him up.

Mum was ok when she rang at 2pm but she rang back at 4.30pm she was quite upset as Dawson decided to go and meet his friend Bree and her Nan (Aunty Eileen) at Macca’s in Charlestown. Mum didn’t want him to go out and was worried about him going out. I told her he is a grown man and has to make his own decisions and maybe learning things the hard way.

Up at 6am before my alarm dressed myself without trouble.

Found a text from Tim he was an hour early for work luckily someone called in sick and he was able to do their run and someone else did his, which meant he wasn’t stuck hanging around for an hour doing nothing.

Our next door neighbour had a minor accident while pulling out of the driveway, he hit another car.

Tasha went off about a parcel that arrived for me from Wish saying I should bin it because it came from China. No bloody way it is a gift I bought for Leo, it has been put away till the time I give it too him.

Mum told me that Dawson went out at 10.30am and at 3pm he wasn’t home yet. She wasn’t worried she just wondered what he was doing.

Up before the alarm dressed and ready for the day, did 20 minutes on the Wii Fit.

It was one year ago today that we lost dad which is causing me to be emotional all day.

Thompson’s Pies rang about the girls not liking the party pies, they will send me 2 replacement packs tomorrow.

Dave took Mum to visit dad, she was ok when I spoke to her.

Had to get out of bed and go in search of my phone this morning, I could here the alarm but no phone next to the bed. I found it in the lounge room where I left it.

I went down and posted 2 letters.

Tasha asked if she could use our dyer I said sure but when Tim found out he went off his head at her and me because I am too soft.

I need a hair cut Tim said he will do it on the weekend.

I am very tired this afternoon.

Awake before the alarm again and also up and getting dress when it went off.

Been in a lot of pain all day with my neck/shoulder as well as chest pain from reflex. Had to lay down for the chest pain to ease.

Leo rang and asked if he could stay the night I said yes.

Did my shopping at both Woolies and Coles for pick up on Sunday by Natasha as Tim will be working.

Awake at 5am and only dozed on and off till 6am when I got up. Leo was already awake as I was going to bed last night I realised I had no Catapress, so had to ring Jess and get her to bring some over.

I am in so much pain in my neck/shoulder again. I went back to bed for 1.5hrs it helped but I am still in pain.

Jess picked Leo up at 1pm and I had a quiet afternoon.

Mum said she had to explain Anzac Day to Dawson and how important it is and that shops will be closed.

Slept in till 7am and got up in pain yet again. Around 9.45 I rang Kathy and had a good cry we talked and I think we are ok. She thinks I need to up my depression meds, she maybe right.

Mum rang again 2.20pm to tell me she had a text from my sister asking if she wanted to sell dad’s scooter I said NO, as I think now she has lost some weight then next time she goes out for a day with Dave & family she might want to use it over the wheelchair.

Tasha coming down to give me a shower after Tim cut my hair. I will the retire to my bed to listen to my book before sleep.

Had a lay in this morning

Had a melt down

Great to get out of the house

A bad day for me

“Just living is not enough”, said the

butterfly. “One must have sunshine

freedom, and a little flower”.

Easter is the time for sharing blessings

Thank you for the blessings of our

friendship. Hope you have a

Another week at home starting

Mum had a fall

In a lot of pain

Mum’s in a state about her phone bill

Pavers laid for my scooter.

May flowers of love

Around thee be ‘twined,

And the sunshine pf peace

Shed its joy o’er thy mind 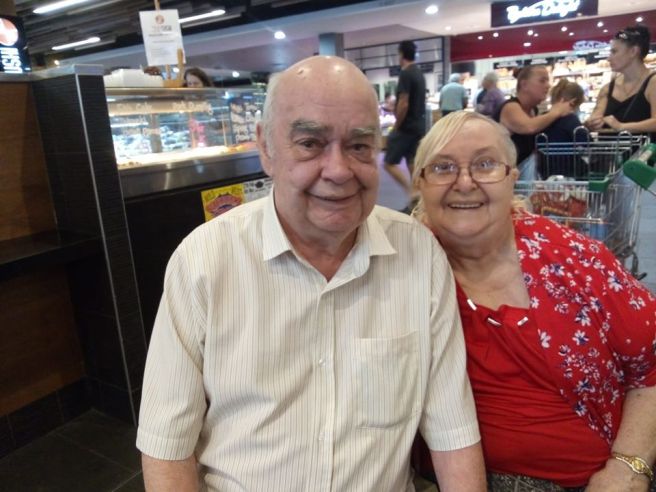 MUM AND HER BABY BROTHER

Tim off to the doctors

Thompson’s pies arrived at 6.15am

Tim has a split shift

Friday and not going out

A cold start to the day