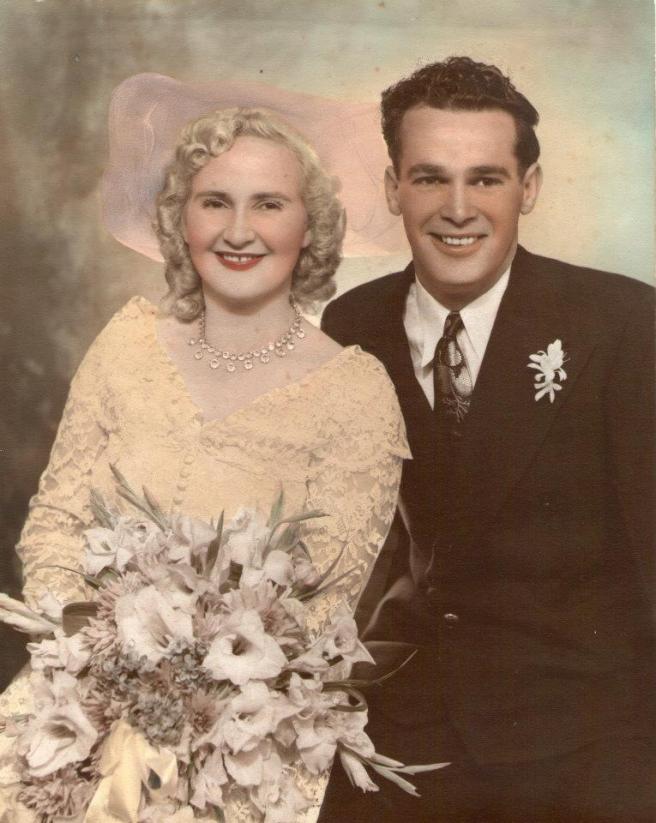 I wrote this 5 years ago but in honour of my nan I am posting it today, as this was the day we said a farewell to nanna. Her funeral was at the same church that pop’s funeral was it is the same church I was married in and all my girls where baptised as well as my granddaughter Summer.

Did I shed a tear, no I didn’t, did I cry and sob sure did, after the church we went to the cemetery then back to Frank and Perla’s before heading home.

There was a good turn out and I know my mum was pleased to see so many of her grandchildren there all my girls went as did all of Jeannie’s children and Kelli, Sue’s youngest daughter went as well. They may not have felt close to Nanna James but the went for their mothers which is the way it should be. Three or four of Uncle Ronnie’s children attended I know his son Jason was unable to go.

My nan was an amazing woman she has always been known as Flo and it wasn’t until she went into the nursing home that I heard her called Florence.

My grandmother was born Florence Torrens on the 31st May 1921 in Wauchope her mother was Mary Ann Cameron and her dad was David William Torrens. She was one of 13 children her siblings where: Ethel, Irene, Trudy, Robert, William, James, Eva, Isabell, Dorrie, Mavis and Nita.

Nan was married twice her first marriage to Merve Townsend resulted in 3 children: Mavis, Ronald and Diane. On the 23rd of December 1950 in Hamilton Newcastle she married the love of her life, Ronald Francis James with whom she had a fourth child Francis.

Nan has been blessed with 15 grandchildren each of her first 3 children have had 5 children each they are as follows: Jo-Anne, Jeannie, Susan, Sandra, David, Noel, Eddie, Ashley, Shirley, Jason, Robert, Wayne, Marie, Geoffrey and Debbie.

Unfortunately Frank and Perla have not been able to have children.

On the 17th September 1972 nan and pop was to lose a daughter with the death of Diane.

She spent her last days in a nursing home I feel that it is a shame that more of her family did not visit her, mostly she received visits from Frank and his wife Perla and her daughter Mavis and granddaughter Jo-Anne.

I have always been close to my nan and feel blessed to be her grandchild she has always been a person to open her heart and home to all that needed her.

As a child I remember Christmas morning after getting our presents we would pile in the car and go to nan & pop’s place for Christmas lunch, nan would had been up for hours cooking and you could smell the food when you arrived it was always a hot cooked lunch.

As a teenager I spent a lot of time with my nan, I use to go and help her clean a dental surgery in town 3 days a week and I remember spending other times at their house, I had my own room there.

During the last couple of weeks of her life my Aunt Perla was with her most of the day and all night leaving in the morning to go home shower, eat and head back. The night/morning she passed away both Frank and Perla were with her she died at around 4.40am on the 19th November 2016.

We will miss you nan, but you are at peace and with pop, Ronnie and Diane now.