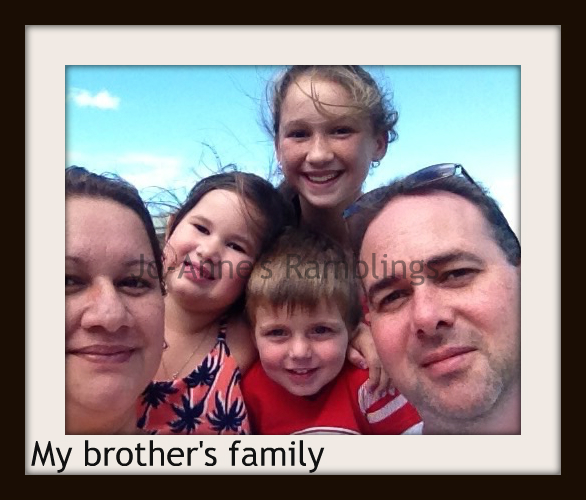 Here we are at Monday yet again so that means a weekend update and some Monday thoughts as in whatever pops into my head I will mention, hope that is ok with all.

Tim just arrived home and you know, I know he is going to turn the telly on because he often doesn’t like the quiet. I have the telly on when I get up but turn it off when I take Leo to school and usually don’t turn it on again when I get up. I don’t mind a quiet house, I can and do often blog and listen/watch telly at the same time but of a morning if I am home alone I will just do stuff on the computer in quiet.

As all know I don’t blog much over the weekend, I read some at times but usually I like to spend the weekend watching shows I have recorded and Sunday is the day I ask my daughters to come over for lunch. Last Sunday I did a chicken and bacon pasta bake and some home-made fried rice. I had asked Natasha, Steve and Blain if they would like to come over for lunch but again they were a no show. I was annoyed but at the same time I understood that Natasha has been busy setting up her new house, the act of moving can be over pretty quick but the setting up of the house can take a couple of weeks.

However, this was the second time I had invited them to lunch that they forgot about, I will extend the invite one more time and if they forget or don’t turn up next time then I what, stuffed if I know I would like to say I wouldn’t invite them again but hell I properly would invite them again because I am far too kind.

Today it is the 31st October for some that means Halloween, but not me I am not into Halloween, I just don’t do it. I have nothing against those who do but when I was a child and really until about 20 years ago it wasn’t a thing here in Australia. To me it is a foreign thing that our stores have latched onto to make more money. I know and accept that the next generation will most likely be right into it and that is ok just don’t expect me to be into it.

On the topic of Halloween, on Saturday the suburb over from be did a big Halloween event they do it each year, its free too, they have jumping castles and face painting and many of the stores have signs saying they do trick or treating and children can go into the stores for trick or treating. Kathy and her girls and Jessica and the boys went and they all had a good time, it was a stinking hot day though and by the time they were done they were exhausted they only stayed for a couple of hours. I drove them first I drop Jessica and the boys off then went back to Natasha’s new house where Kathy and the girls were waiting and then I drove them I then went and left Kathy’s car at Natasha’s house and brought Jessica’s car home.

Tim took our car to work on Saturday as he discovered that the front tyre on his motorbike was as bald as can be he has it booked in to get a new tyre today it has been four years since he last replaced the tyre.

Today is also my baby brother’s birthday he is 38 today, I can remember when he was a baby and I used to change his nappies and walking the floor with him at night wearing mum’s dressing gown to settle him while mum drove dad to work. I gave him a dozen cans of Jack and Cola and a key thing

It is also 38 years ago this year that my mum had her stroke, Dave was only 6 weeks old when mum had her stroke, it happened over the weekend but mum waited till the Wednesday to go to the doctor as she had to wait for dad to get paid before she had the money to see the doctor. She went from the doctors to the hospital when the doctor told her she had to go to hospital she said how can I, I have 5 children to take care of including a 6 week old he said you can take the baby with you but you have to go to the hospital now and so she d id. Today you wouldn’t know she ever had a stroke.

2 thoughts on “Monday Stuff on Dave’s Birthday not Halloween”